skip to main | skip to sidebar

I have come to realize that I inherited from my father's Danish side (ie Hans Christian Anderson) the fact of telling "long" stories. Unfortunately my father always had the hard time of finding a patient audience, hence never being able to finish or tell the whole story. Thus here we now have blogs! You are welcome to skip what you like, but this enables me to get the whole story told! Yay! (I can hear my father laughing) I finally get it!

I was at the beach, Peter went out surfing, before I paddled out I decided to do some Qigong and run the Light Body energies. After I had done that I looked up and thought, "Hmmm that is curious!" The clouds swirled around and opened up a clear blue spot in the sky. I had recently done some meditations with Children of the Sun. They had shown a picture of something similar in the sky where the clouds had opened with a blue hole of the sky showing and they called it a "Portal". So I kiddingly told Peter after we had surfed,"Did you see that Portal that opened up, I was doing qigong and lightbody and a portal opened up!" He looked at me and did a double take, and said "Yes!"  Now it was as if he believed me that it was a "Portal" that had opened up because he saw it. Then even I was amazed, because I thought I was making that up. 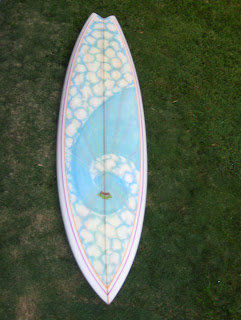 Peter shaped a surfboard and after we got such a cute article from the Honolulu weekly Island Wise he decided to let me paint this one. I really couldn't think of what to paint on it, then Peter came in with the idea of "Why don't you paint the portal we saw in the sky that day?" So first I painted the surfboard then the thought came to me to just do it on a canvas too. This is how the canvas developed.

I had gone to California to visit family and in so doing spent the last days of my visit with my daughter, Kyra, at her family's house that she is a nanny for. In their house there was very expensive modern art. One particular piece was of giant block letters with newspaper print on the inside spelling out "REMAIN CALM" with red around the outside of the lettering. After I came home I saw a bit on the news about some modern art that had similar pieces. Thus the idea came to me that perhaps I could be sneaky and use that to teach, making my version of modern art with a not so subtle message which would be beneficial to all.

In the meantime my daughter, Michelle, who is a great artist and has been studying art in college was directing me on composition. She showed me her diagram of the golden mean spiral which I actually have been reading a book about. Of course in nature everything uses this spiral and especially in the sky with the weather. What else would a portal be but the golden mean spiral, so in taking her teaching I could match it to this which I was trying to replicate, what I saw in the sky when the "portal " opened up.

As I was working on this canvas into the night, I looked up and saw the constellation of Orion. In the book I had been reading it explained where the two intersecting lines with the golden mean spiral met was considered to be "the eye of God" to some ancient cultures. Of course, they should technically go out to infinity, it is a way to express depth and dimension. Interestingly I noted the stars forming those exact lines, which of course, (duh!) that is probably why the pyramids are built to match that constellation of Orion.

I should mention that for the past few months I have been listening to sounds from Estaryia Venus that particularly pertained to the Fibonacci sequence and phi and the golden mean ratio. I had been listening to these sounds every night because it helps me to go to sleep.

Now the painting was done enough and it comes to be time for me to go to this Tai Chi workshop on Women's self defense. I really didn't think I needed or was very interested in self defense, but my Qi gong teacher Daisy Lee, highly recommended and brought this Tai Chi master, Arthur Rosenfeld  to Kauai. My guides kept telling me, yes, that I should go to the workshop, so I went. What was the jist of the whole workshop? The big ancient secret being passed down? What else but, you guessed it!............. SPIRALS!!!!!!!!!!!

Hahahahaha Well I hope I don't need to use them in self defense but I can already see I have and can still use them in my paintings! 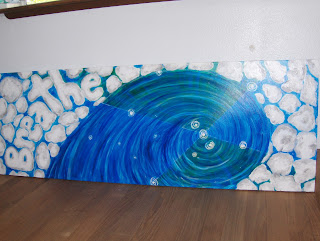 Posted by LupitaJustLupita at 9:19 AM No comments:

LupitaJustLupita
Warning! You must have an imagination to read my blog! I am an artist. Now I am a grandmother!